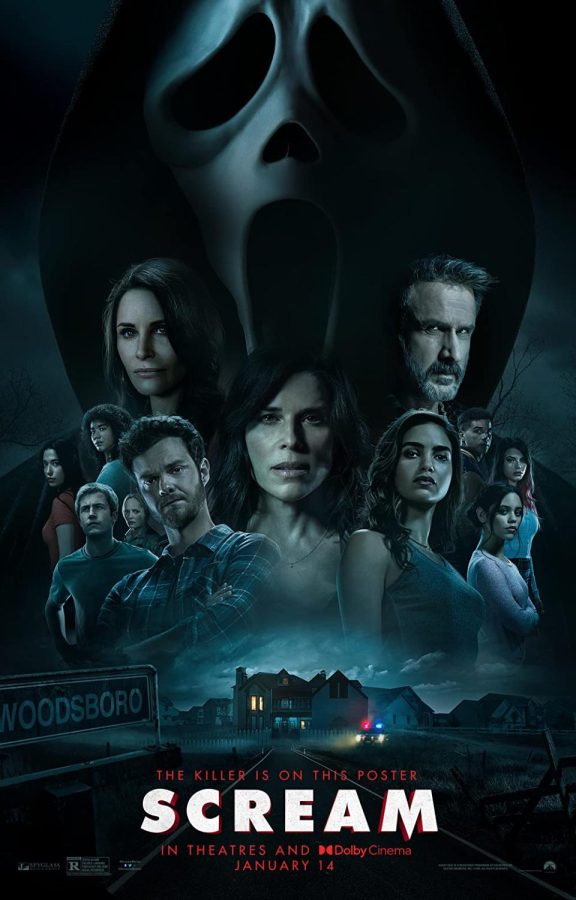 SCREAM is one of the most iconic movies in the horror industry. Not only do the filmmakers make their twist on horror and slasher films, they also have fun doing it. The fifth installment of the Scream series recently premiered on January 14. This installment featured the main three cast members from previous entries with the addition of some fresh faces.

This film was directed by Matt Bettinelli-Olpin and Tyler Gillett; they are co-directors and a part of Radio Silence. This is a change from the first four movies that were directed by Wes Craven. Many fans were not looking forward to this movie due to this change of director.

This film was incredibly done— from the casting to the plot tie-ins.

You don’t necessarily have to watch all four movies before you watch this one, you only have to watch the first one. The screenwriters (James Vanderbilt and Guy Busick) did a great job of piecing relationships together and giving us a reason for this new cast to be introduced.

The film techniques used were amazing, from the camera angles to the tension of scenes, I enjoyed every moment of it. You never really know who to suspect for the murders, which makes a great murder mystery. The actors and actresses did an amazing job portraying this.

Watching this film, it’s extremely fun to try to make predictions, or guess who you think the killers are. However, my predictions for this movie were completely off. I knew they were wrong as soon as the opening sequence was over. I am glad that this movie showed me how a plot twist is done.

The kills were nothing less than amazing. Not only did they stick to the iconic Ghostface killings, they also tugged at heartstrings with multiple deaths. I enjoyed the way that William Purcell, the special effects coordinator, got the deaths to look realistic and not over-exaggerated.

The new cast does nothing but exceed fans’ expectations. Coming into a franchise this big is extremely intimidating, yet, this new generation of actors is fantastic at portraying the Woodsboro teens.

One thing that I love about this film is that it isn’t based around/in high school, and it doesn’t copy the entirety of the first film. It offers an older cast who have graduated and moved away combined with local high school students.

I am a fan of Jack Quaid’s acting. He was amazing at being able to include personality and stick to the Scream-style of acting. His character was quite complex and interesting as well. Rather than being related to one of the main characters from the first movie, he is just the boyfriend of Sam, the main character. His character also had no idea about the events that occurred in Woodsboro until he went there with Sam, which made for easy exposition.

Overall, this movie is a must watch in my opinion, and it does a fantastic job of making a worthy sequel. It wasn’t cheesy, and it wasn’t overdone. Scream 6 has been announced and is in production, I cannot wait to see what they do with this franchise next.