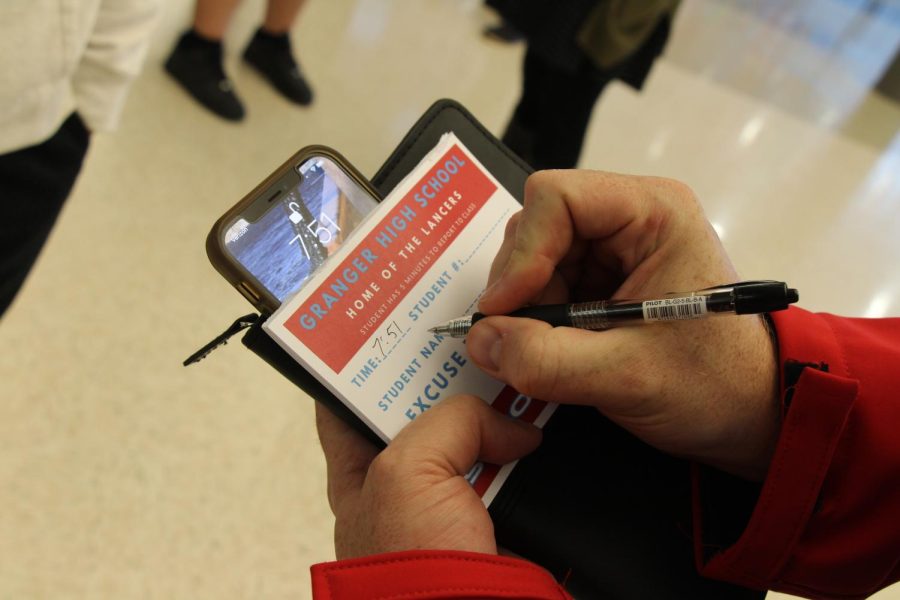 After a 15-minute grace period for unpredictable traffic situations, Mr. Adams and his colleagues issue tickets to tardy students.

OVER THE years, Granger High School’s administration has addressed low student attendance in many ways.

Last month, the administration initiated the latest attempt at getting students to class on time by revamping the On-Campus Reassignment (OCR) policy. Each time a student is late, they must get a check-in pass from an administrator before going to class. Penalties increase with each subsequent offense.

Mr. Adams, an assistant principal, says the policy has been successful so far. “The halls have been clearer; students have been rushing to class like they should,” he said.

Adams feels that it is important for there to be a system for students to check in. He said, “Legally, we supervise the entire school, so we need to understand where students really are.”

Upon first impression, Siaosi Nuusila (9) supported the policy. On the second day of the policy, he was given a check-in pass. He says it will affect how Lancers behave. “It will help people put time and effort into going to school. It’s going to help people who slack off and guide them,” Nuusila said.

Other students like Marwa Aslami (11) feel less positively about the attendance policy. While Aslami has not been affected, her friends have been. She pointed out that juniors and seniors who know they will be late, just go home instead of getting a pass because older students often have cars.

“If you’re five or ten minutes late, you’re missing a whole lecture. Why are the kids who are a little bit late, and want to be in class, being punished more than the kids who skip class?” Aslami said.

Daniel Allison (11) also feels that the policy is unfair. He explained that he was late to class once shortly after the policy was put in place. Because he had nearly reached his class in H-hall when the bell rang, walking to the alumni room caused him to miss even more class.

Allison is not convinced that the policy will work as intended. He thinks it indirectly encourages otherwise good students to skip class altogether if they are running late. “Most people I’ve talked to said that if they’re late, they just won’t go to class,” he said.

That prospect troubles him. “It’s more important that we’re in class than it is that we’re on time,” he said.

Teachers like Ms. Cosgrove feel frustrated by the attendance issue. However, Cosgrove also has some reservations about the new policy. She says it is confusing at times because many students do not understand the passes, and some teachers do not know what to do with the passes once they receive them.

Cosgrove says that some of her best students are being negatively affected for no good reason. She believes that the root of the issue is not tardiness, which is what this policy primarily addresses.

Overall, Cosgrove calls for compassion: “A lot of times, teachers tend toward an almost authoritarian approach toward the rules instead of building a relationship with that kid who is late.” She says that teachers should try to help students in a constructive way, rather than enforcing rules in a way that feels punitive.

Despite its critics, the policy seems to be here to stay, and the administration is hopeful that it will help students learn to prioritize punctuality.