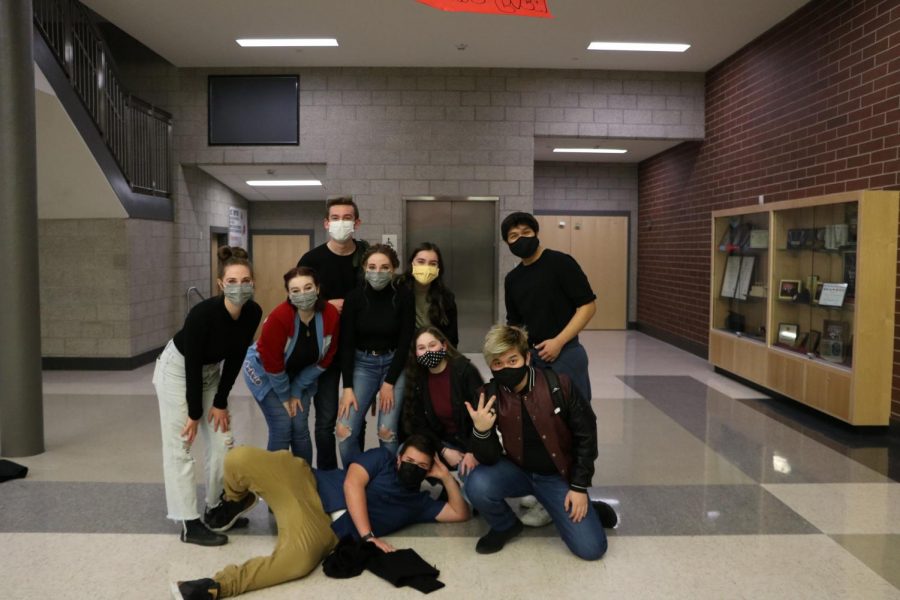 HINDSIGHT is a play written, directed, and performed by Granger’s theater participants. It’s central theme focused on a teen’s life during the events of 2020. The production displayed key events of 2020 such as George Floyd’s passing, the Black Lives Matter movement, mask mandates, and school shutdowns. The production was well composed, and had a good overarching theme.
The play covers topics involving school, and how the pandemic affected it. They exude the confusion, anger, fear, and sadness associated with the school shutdowns. They also show how kids react to their favorite school activities getting canceled. At one part, teens act out the protests against wearing a mask. Lastly, the play shows the overwhelming shift to online school. Students were crammed with difficult work that they couldn’t understand.
The production also contained heavier themes such as a teens’ mental health during the pandemic, and the Black Lives Matter movement. They display the fact that teenagers were bombarded with homework while doing distance learning which was very stressful. They also talk about being lonely, confused, depressed, anxious, or stressed during the quarantine period.
The team also talked about the weight that is George Floyd’s passing and police brutality. There were monologues given to address the injustice in our country. They mention how hashtags and posts from teenagers won’t solve racism, and that to make a change we need to act.
The play was well liked by the audience. Laura Gale said that the play was relatable to her own mindset during 2020. She said, “Even though I am an adult, I could still relate to some of it”. Gale says that she also struggled with mental health during the pandemic. Gale also said that the play was, “written and performed clearly” which was a pleasant surprise since it was done by Granger’s students.
The play also received a review from Cindy Neibuar, a teacher here at Granger High. Ms. Neibaur explains, “I thought it was very courageous, and very brave, to put their voice out there”. She goes on to say how proud she is for the actors to be vulnerable with the audience, and each other. Neibaur also states, “It [The Production] was allowed to be honest. It was allowed to be real and raw.” Most of all, she said that the production was a great representation of the teenage experience through 2020.
Neibaur also said that it brought issues to light, and gave a glimpse into a teenager’s state of mind. It forced Ms. Neibaur to reflect on her own actions, and what she could do to help other people. Finally, Ms. Neibaur loved the play, and would absolutely recommend it to others!
After the play, there was a Question and Answer discussion held with the cast. The cast said, “The Black Lives Matter scenes were the hardest to do.” They explain that it was the hardest to write and perform because the topic was so heavy. They also said that it was “…hard to be open about the mental health problems.”
In conclusion, the play was relatable to teenagers, and showcased teenage feelings to adults. The play’s production quality and acting was great! The writing and performance was well executed, and sent a strong message to the audience. “Hindsight” was an eye opening production that was well written, performed, and received.