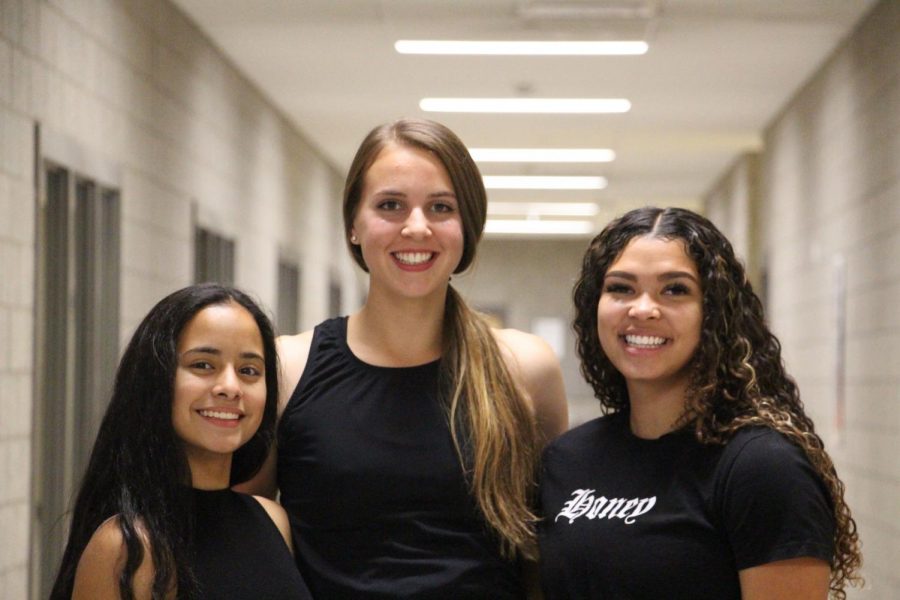 Seniors Leslie, Taunya, and Raja enjoy dancing as Excaliburs until they graduate in the spring.

HERE AT Granger High School, we have an amazing drill team. Our drill team’s name is the Excaliburs. Mrs. Lago is the person who directs the drill team. Students in any grade can join the drill team. Many of the current members joined their freshman year because they love dancing, while others wanted to gain more experience throughout their highschool years.

Seniors that are part of the Excalibur team will be enjoying their last year in drill before they graduate. Many of them are going to miss dancing for assemblies or competing with different schools. These seniors will definitely miss their whole team they have spent time dancing with throughout high school.

Leslie Jara (12), the captain of the Excaliburs, will be graduating in the spring of 2020. This will be Jara’s last year before leaving Granger High School and continuing her life. Many Excalibur members gained opportunities by being on the team. “Drill has absolutely opened many doors for me and different new opportunities and I’m glad it did,” Jara said.

Jara joined the drill team in her freshman year, and she joined because she loves dancing. “I joined because I love to dance and I want to become better at dancing,”Jara said. All of the girls on the drill team became comfortable and created a great bond among its members. “ I look up to all of my team, I see them all as my little sisters. I will most definitely miss them all once I graduate,” Jara said.

Jara’s last year here at Granger High School has been one to remember. She had a very good, fun experience throughout her high school years. “We been working a lot this year, I’m happy I’m going to spend my last year with my whole drill team,” Jara said.

Another senior that will be graduating in the year 2020 is Raja Benning (12), who joined drill in her freshman year alongside Jara. Joining drill didn’t only open many doors for Benning, but it also helped her form new friendships that got her out of her comfort zone. These seniors recommend that if a student loves dancing, they should definitely consider trying out for the team.

“By joining drill it has given me more opportunities like more dancing experience. It also made me involved in school more,” Benning said. Benning joined drill because she loves dancing and wants to become better. “Once I graduate, I’m going to miss my team. All of them are my little babies,” Benning said.

Any seniors that are part of a club or are in any sports for the school are going to miss their team once they graduate, but hopefully many of them will continue on to do what they love the most. “So far, my senior year has been really fun and I’m sad that it’s my last year here at Granger, but I really enjoyed it,” Benning said.

Taunya Perkes (12) also joined the drill team her freshman year. “I learned many more things by being part of the team and I’m happy that I get to enjoy my senior year here at Granger,” Perkes said. The team has had many good impacts on these students. They are all comfortable among one another and they can trust anyone in the team. Drill has created many good opportunities for Taunya. “I always wanted to move on to the next step of being in studio and by joining drill, and it has helped me into taking the next step,” Perkes said. Taunya will most definitely miss her whole drill team as well as participating in school events and dancing with her drill team for assemblies. “I feel really sad to go but also excited to move on in life,” Perkes said.