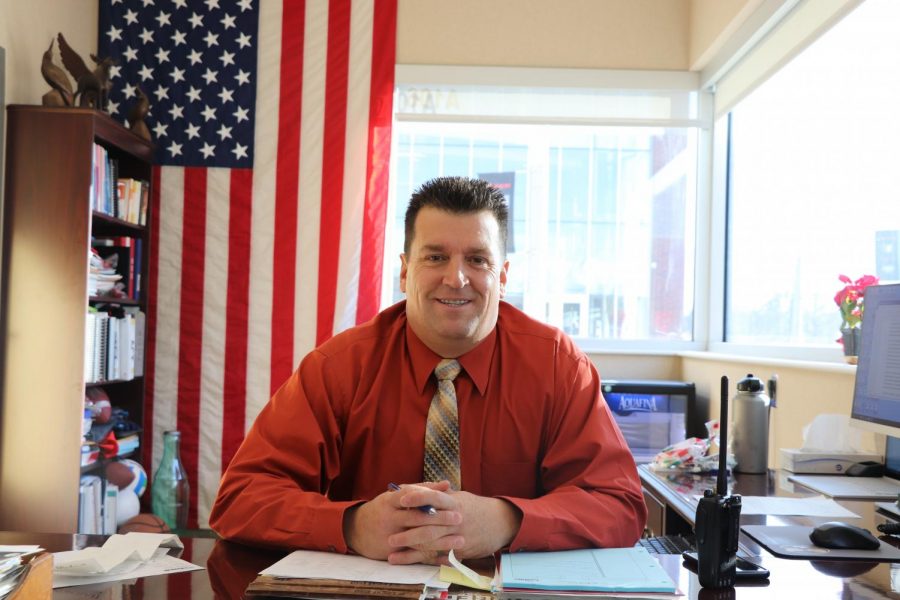 Dr. Dunn, smiling with pride for our Super Lancers.

AT GRANGER High School, hard-working students are typically rewarded different awards as a symbol of appreciation for their great behavior and attitude. Among the rewards given to students is the Super Lancer award. This award was created by Dr. Dunn a few years ago. Teachers of Granger decide which students are Super Lancers based on their accordance with school rules and standards. Since the Super Lancer award is seldom granted, it is a special honor to be declared one.

Five years ago, Dr. Dunn came up with the idea of a Super Lancer. “I was inspired to make this award because I wanted to recognize students who, day after day, are doing what they need to be doing,” Dunn said. He added that Super Lancers are not typically recognizable people; instead, they are, “students overcoming challenges and who still continue to work hard.” Dunn came up with this idea when he worked at Murray High School. He originally named it Super Spartan, but when he came to Granger, he modified it to Super Lancer.

Teachers are given the opportunity to pick a potential Super Lancer from the multiple classes that they teach.  They are trusted to nominate students because they get to know their students really well in the course of an academic year. Accordingly, teachers have a sense of who has been following the rules and standards of Granger and working hard.

Most students who receive this award accept it with pride. “I was awarded this by Mr. Demoux. He gave me this award after he helped me with many lifestyle changes,” Devin Wilcox (9)  said. “Mr. Keyes gave me the Super Lancer award because he noticed that I help many students in our class with work and any other questions they had,” Ruby Ioni (10) said. Both of these students were pleasantly surprised when they became Super Lancers, and they were tremendously grateful that their hard work was recognized.

This award is given out 4 times a year during each quarter. Teachers select approximately 20 students who have good attendance, grades, work ethic, and attitude. Upon selection, Super Lancers are gifted a certificate, a banner with their picture on it, a Granger pin and keychain, and $20.

The Super Lancer award has done an excellent job highlighting students that would have gone unrecognized for their hard work. This award is inclusive and encourages Lancers to continue working hard. It has certainly had a positive impact on Granger’s student body.