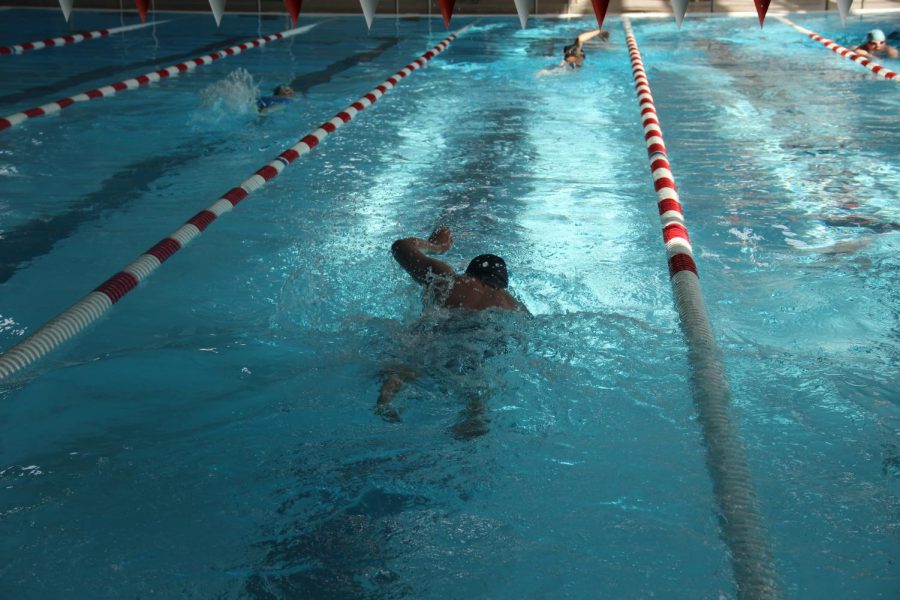 Lancers on the swim team are passionate about the sport.

SWIMMING as a sport involves participants competing to be the fastest over a given distance in a certain period of time. Competitors swim different distances in different levels of competition. In the United States, a pool 25 yards in length is commonly used in competition.

Other swimming and water-related sports include open water swimming, diving, synchronized swimming, water polo, triathlon, and the modern pentathlon. The swim team at Granger High practices anywhere from 1-3 hours in the morning as well as after school.

Mr. Carter, the swim coach, encourages all students to join the swim team. “To join the team, students must register their paperwork. Also, you would need to get a time trial done. We would have you swim a certain distance and time you to see if you’re fast enough to be on the team,” Coach Carter said.

Another thing students need is at least a 2.0 GPA and no F’s. The swim team fees are also quite inexpensive. “It’s around $60-$100 for the fees for suits and travel fees,” Carter said. Many of the students on the team believe that swimming is a fun after school activity to partake in. “It’s a fun sport. You get to improve social skills and I improved my self-esteem towards my body,” Eduardo Villalpando (11) said.

However, there are a few difficulties when it comes to swimming. These challenges might include not being able to breathe under the water to things like weather complications. “If I could change the season, I would change it to spring so we aren’t as cold getting on the bus,” Villalpando said.

The idea of swim being an individual sport also was proposed. “Swim is basically an individual sport. We compete against other schools but the most important thing to me is competing against your own time,” Angelrose Harvey (12) said. She mentions how she would like everyone to join, and even if they don’t know how to swim, Harvey would love to teach them.

The first swim meet of the year will be on November 14th against Copper Hills. The meet will be held here at Granger High. There is a rivalry towards Taylorsville as well. Two years ago, the swim team beat Taylorsville. Last year, they lost.

Different students are worried about competing against different teams. Kaelynne Grant (12) mentions that she is worried to meet with a couple of teams.

“I think I’m most worried to play Kearns, but Taylorsville is a close second,” Grant said, “I’ve been swimming for 11 years and when I found out Granger high had a swim team, I just had to join it.” Grant also mentioned how much she loves the water.

To be on the swim team, students need to love the sport. The practices show the dedication of these students. If one isn’t passionate about the sport, they wouldn’t fit into it. The team uses their passion and dedication to practice hard and for long periods of time.

“We have to do a lot to get prepared,” Harvey said. “We go to the pool after school, go in at 2:45, change into our swimsuits in the locker rooms, the first person puts out the lanelines, usually during practice we would put in five. We stretch our bodies and get into the water, talk as we swim our laps and do our workouts. Finally, we get an inspirational speech from Mr. Carter,” Harvey said.

The swim team is accepting new participants and beginners to swim to help train and get prepared for this upcoming season. They’re training hard everyday and getting in their daily laps to keep active for the upcoming meets.