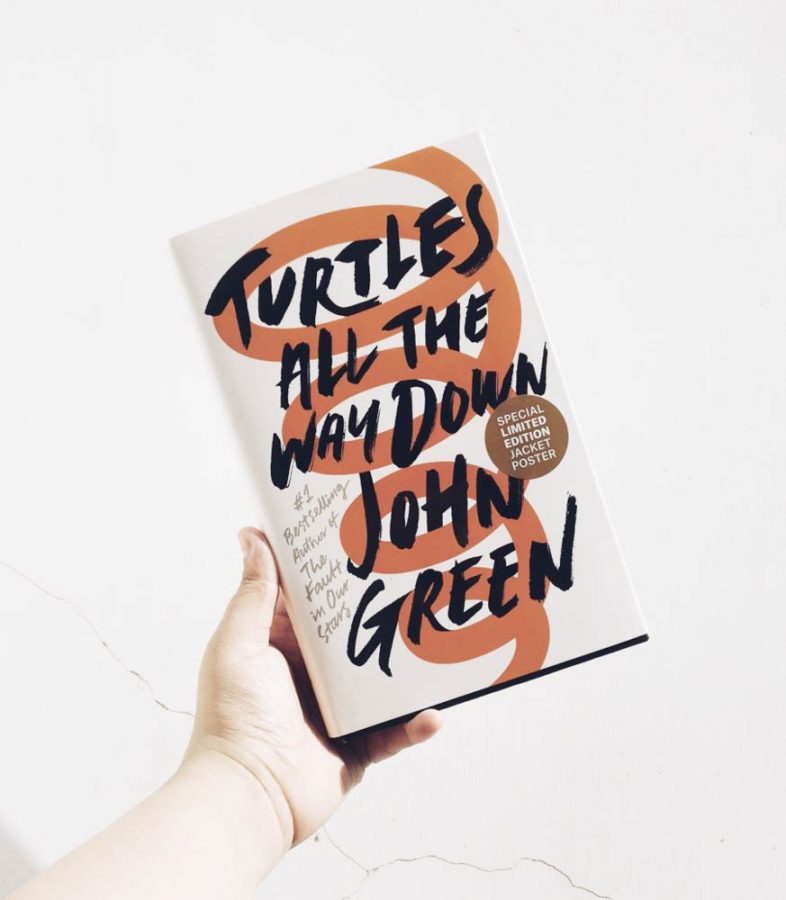 TURTLES All the Way Down is a new adventure novel written by John Green. This book has a very different vibe than all of his other books.

In this story, our main character is a 16-year-old girl by the name of Aza. I found this character quite relatable. She is a very compulsive girl and is always thinking, or rather, overthinking.

This book always had me wondering what was coming next or what was going to be the next thing that Aza did. There were things that were normal that she did often, but then there were things that took the story for a turn. Her best friend, Daisy, was usually the cause of these small little turns or different adventures they went on.

Depending on how you feel, it can cause some conflict with Aza because she is a girl who doesn’t really understand her place in the world in a way that isn’t what you would likely think. Of course, she is a teenager and that’s how most of us feel: like we don’t really have a place yet.

This leads to a lot of different conflicts and troubles in the book.

Now, most of us teenagers are looking for someone to call ours, more specifically a boyfriend or girlfriend. Now imagine not being able to be with that person because you can’t handle their bacteria. This is not something you or I would normally think of, but for Aza it is.

Another character that some of us may relate to is Davis, Aza’s love interest. He writes poems and has a lot of different views on the world. He and Aza have a complicated relationship because they want to be with each other, but with Aza’s problems she doesn’t feel like she can maintain a relationship. They reference a relationship between them as being like a ferris wheel.

Now to me, I think that this book has something that everyone can relate to in some way because there are so many different views from different characters on different things. It’s not overwhelming, but they are things that help the story progress and move along. Without these views, the book would be boring and the story would be bland and basic.

The way John Green can incorporate all of these different feelings into 286 pages is very impressive, and to be quite honest I find his works almost alluring and mesmerizing. They are something you start and just have to finish just because you will never know what you are going to get next.

As I was reading this book I was always stumped on what could possibly happen, just because Aza’s mind is always running on overdrive. Since she is always thinking about various different things, it affects the entire story completely because her decisions affect all of the other characters in some way.

Though, you would have to be someone that can deal with frustration because Aza is that way. She never knows exactly what she’s thinking and her actions sometimes even make her frustrated. Not understanding yourself and your thoughts can cause conflict in real life, so just imagine when a made up character feels this way in a book where anything can happen.

It is definitely something to look into and find out, just because we all have these curiosities about life and ourselves. This book takes that all to a new level with the words and the way everything plays out.

Aza even has medication and sees a therapist to try and figure out her self-worth and to try and get her thoughts to calm down. She is scared to live every day in fear of multiple different things like infection, disease, bacteria, and not being in control of herself.

Now we all have our bad habits, but Aza has habits that included constantly opening a wound to clean and change the band-aid or consuming hand sanitizer. Aza, of course, knows these things aren’t healthy or logical, but she also knows that she is somewhat crazy.

Her thoughts sometimes don’t even appear to be her own and are more like demands that her mind is giving her. This makes her feel like she isn’t who she should be, or more like she’s not someone at all and merely someone existing to do the bidding of another.

You can be sure to expect adventure, frustration, love, and unpredictability from this amazing story.