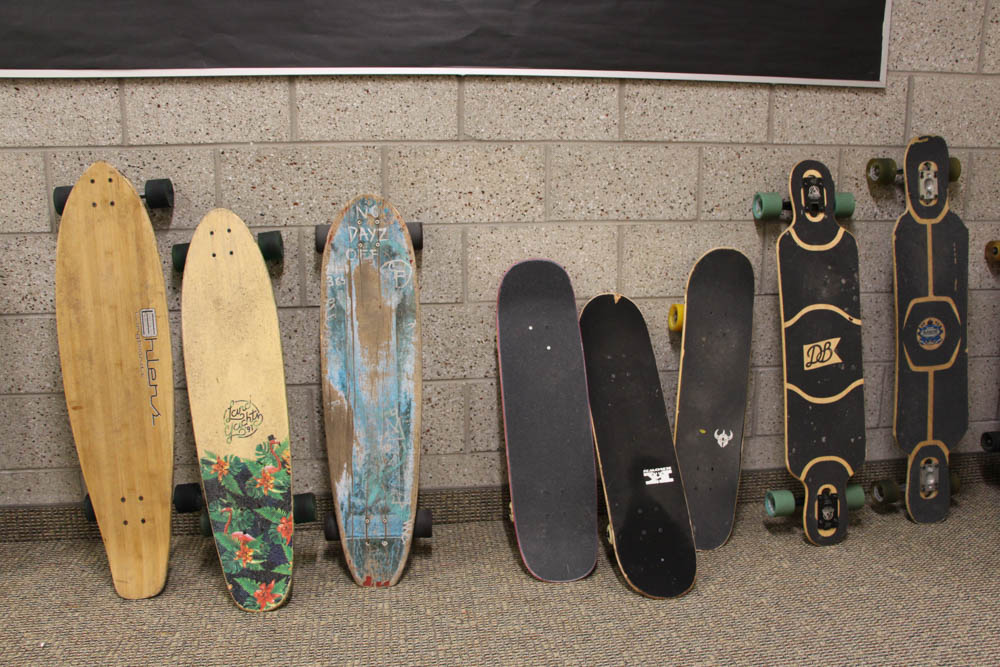 HAVE YOU ever used your long- board or skateboard on school grounds and got scolded by an administrator, or even seen that happen to another student? This happens a lot because of safety reasons and boarding on school campuses has been banned from many schools around the states.

In my opinion, I think people should be able to use their boards on school campus, because that could be their only transportation to school. The University of Utah has banned long-boarding and skateboarding on their campus. According to The Salt Lake Tri- bune, there was once a professor at the university that had gotten injured on school grounds by a boarder.

“A lot of the kids are not try- ing to hurt somebody, but they can’t stop, they’re out of control,”

Chief Scott Folsom said. I personally agree with his state- ment about this, boarders are out of control especially when they’re going down hills. If you had any experience with going down hill you’d know that it’s hard to con- trol yourself.

I think we shouldn’t ban skate- boards and longboards on school grounds. Like I said, a board could be their only transportation

to school. They may not have a car, bike or even money for a bus. They may be using their board to get across campus faster, you can’t argue that riding a non-mo- torized vehicle to your next class is faster than walking.

Also, we all know that it’s not smart to be riding your board in- side the school but what about during lunch outside? Here at Granger there are signs that say you can’t ride a non-motorized vehicle around the school.

There are many skaters and longboarders and I sometimes see skateboarders by the tennis court during lunch, which is smart be- cause not many people go that way for lunch, I actually go that way for lunch and a couple of other students do, too. The skaters usually stop what they’re doing and let us pass, sometimes they don’t stop but that’s only because no one is going their direction.

In other words, students that longboard or skateboard aren’t causing any trouble, they’re actu- ally minding their own business. I believe that the students are very cautious about their surroundings. To be fair, no one wants to collide with anyone at full speed—you’d end up with a broken nose or something worse.

I feel like people are always cautious when they are around cars, skateboards, longboards, bikes, or even scooters. Sure there’s always that one person that never looks where they’re going, they don’t even look up from their phones or that person just doesn’t care about anything at all.

Students that are distracted

are mostly the ones that get hurt, we shouldn’t blame the students for bumping into the distracted person and take something away from the student. If you ask me, we shouldn’t be banning skate- board and longboards because it’s recreational.

Students just want to do some- thing fun when they’re bored why else would they just ride their board around? Students are bored during lunch, sure they could do other things, however those other activities they could do doesn’t spark as much interest as long- boarding and skating.

In my opinion, skateboards and longboards are not the en- emies here.

We should allow students to ride their boards outside around campus and administrators shouldn’t con scate the student’s item. Most of the students that ride these boards really do mind their own business. Why should we take away their fun when they aren’t bothering anyone?

Also, this may be the stu- dent’s only transportation and why should we take away their only ride to school, they wouldn’t be late because they’re not wait- ing for anyone to take them the to school and by knowing that you’d go to school yourself you have this instinct of leaving early for school to get there on time.

Schools should allow students to ride wherever they can out- side on campus grounds and let the kids have fun and have them feel comfortable at school and let’s not have our students here at Granger feel restricted along with feeling imprisoned at school.